The rapid adoption of digital business transformation processes and the ongoing deployment of open hybrid cloud platforms are enabling the achievement of software development bold goals. But when management consultants and industry analysts talk about how IT innovation is changing many organizations, government leadership of this key trend typically isn’t top of mind.

Agile methodologies, continuous integration and continuous delivery are improving IT collaboration and migration speed. But according to the findings, help is required — with 66 percent of leaders saying that their agency needs to move IT services to the cloud faster to meet their mission and constituent needs.

DevOps is a software development and IT management method that brings software engineering, quality assurance, and IT operations together as an integrated team to collaboratively manage the full application lifecycle. The MeriTalk study examined the cultural and structural barriers to cloud adoption, and potential positive impact from DevOps practices within a government environment.

“We’ve heard a lot about cloud barriers, and we’ve all seen the lackluster GAO cloud spending data,” said Steve O’Keeffe, founder of MeriTalk. “This study highlights a viable path forward. DevOps can help agencies change lanes and shift from inefficient silos to a dynamic, collaborative environment. It’s about people and how they work together, as well as the technology they use.” 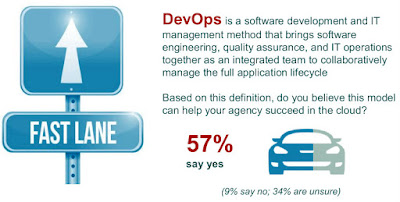 While security and budget concerns remain top of mind within the leadership of government agencies, organization structure and cultural issues continue to slow the progress toward cloud computing service adoption.

Forty-two percent of IT leaders cite infrastructure complexity as a top challenge to adopting cloud, followed by fear of change (40 percent), inflexible practices (40 percent), and lack of a clear strategy (35 percent).

Some agencies are gaining momentum, but many are experiencing difficulties with the practical execution – since the introduction of cloud, just 44 percent of U.S. Federal agencies have made the required process or policy changes, 30 percent cultural changes, and 28 percent organizational changes.

Moreover, the study uncovered that these same Federal agencies aren’t properly equipped – only 12 percent believe that their IT department has all of the tools they need to transition to the cloud.

Four out of five IT managers (78 percent) believe their IT department needs to improve collaboration to enable a more streamlined move to the cloud. But, only 10 percent of Federal IT managers said that their software developers and administrators are highly collaborative.

Outlook for Meaningful and Substantive Progress

Among the IT managers that understand DevOps benefits, just five percent say their agency has fully deployed a DevOps model. However, 60 percent do see DevOps in their future. Thirty-two percent of government IT managers that are already familiar with DevOps had also adopted the model or planned to do so within the next twelve months.

So, what are the perceived next steps? In order to successfully implement a DevOps model, government IT managers say agencies should train their current personnel (55 percent); establish a new vision for the future (41 percent); and create an incentive for a much-needed change in organization culture (40 percent).

Why is customer service a competitive advantage?

How to calculate the price of business reputation?

Are you thinking of lowering prices because of the crisis? Read this first.

eBusiness Planet is your online business website. We provide you with the latest breaking news and articles straight from the eBusiness industry.
Contact us: email@ebusinessplanet.com
© Copyright 2022 - Lexur
Posting....